The chemical bond is of central interest in chemistry, and it is of significance to study the nature of intermolecular bonds in real-space. Herein, non-contact atomic force microscopy (nc-AFM) and low-temperature scanning tunneling microscopy (LT-STM) are employed to acquire real-space atomic information of molecular clusters, i.e., monomer, dimer, trimer, tetramer, formed on Au(111). The formation of the various molecular clusters is due to the diversity of halogen bonds, and AFM images clearly show bright line features at the specific sites where halogen bond forms. DFT calculation also suggest the formation of three distinct halogen bonds among the molecular clusters, which originate from the noncovalent interactions of Br-atoms with the positive potential H-atoms, neutral potential Br-atoms and negative potential N-atoms, respectively. This work shows that nc-AFM and BR-STM can directly investigate halogen bonds in real-space and can be used to unambiguously discriminate their bonding features. This work demonstrates the potential use of this technique to study other non-covalent intermolecular bonds and to understand complex supramolecular assemblies at the sub-molecular level.

LT-STM/nc-AFM measurements were carried out an integrated scanning probe system consists of Scienta Omicron low-temperature scanning tunneling microscopy (LT-STM) combined with non-contact atomic force microscopy (nc-AFM). The LT-STM images were recorded in both constant current/height mode using AFM tip with functional CO molecule, and bias voltages were applied to the sample. For nc-AFM images, the constant-height mode with AFM CO-tip was used to record the frequency shift (Δf) of the qPlus resonator (sensor frequency f0 ≈ 27000 Hz, Q ≈ 25000). All the measurements were performed at 4.2 K under a base pressure better than 10-11 mbar. 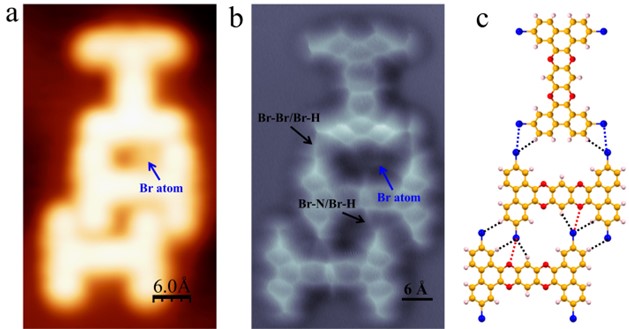 Figure 3 displays a 2-TBQP trimer. The trimer forms by the combination of a dimer (stabilized by Br-N/Br-H halogen bonds, as previously discussed) and a third molecule joined via Br-Br/Br-H bonds. The Br-N/Br-H and Br-Br/Br-H halogen bonds are labeled by black arrows. An individual Br-atom (labeled by a blue arrow) adsorbs on the N-atom site of the dimer. We propose that due to steric hindrance arising from individual Br-atom adsorption, a third molecule joins to the dimer via Br-Br/Br-H bonds rather than Br-N/Br-H bonds.