The 4f-electron delocalization plays a key role in the low-temperature properties of rare-earth metals and intermetallics, and it is normally realized by the Kondo coupling between 4f and conduction electrons. Due to the large Coulomb repulsion of 4f electrons, the bandwidth-control Mott-type delocalization, commonly observed in d-electron systems, is difficult in 4f-electron systems and remains elusive in spectroscopic experiments. Here we demonstrate that the bandwidth-control orbital-selective delocalization of 4f electrons can be realized in epitaxial Ce films by thermal annealing, which results in a metastable surface phase with reduced layer spacing. The quasiparticle bands exhibit large dispersion with exclusive 4f character near Γ and extend reasonably far below the Fermi energy, which can be explained from the Mott physics. The experimental quasiparticle dispersion agrees well with density-functional theory calculation and also exhibits unusual temperature dependence, which could arise from the delicate interplay between the bandwidth-control Mott physics and the coexisting Kondo hybridization. Our work opens up the opportunity to study the interaction between two well-known localization-delocalization mechanisms in correlation physics, i.e., Kondo vs Mott, which can be important for a fundamental understanding of 4f-electron systems. 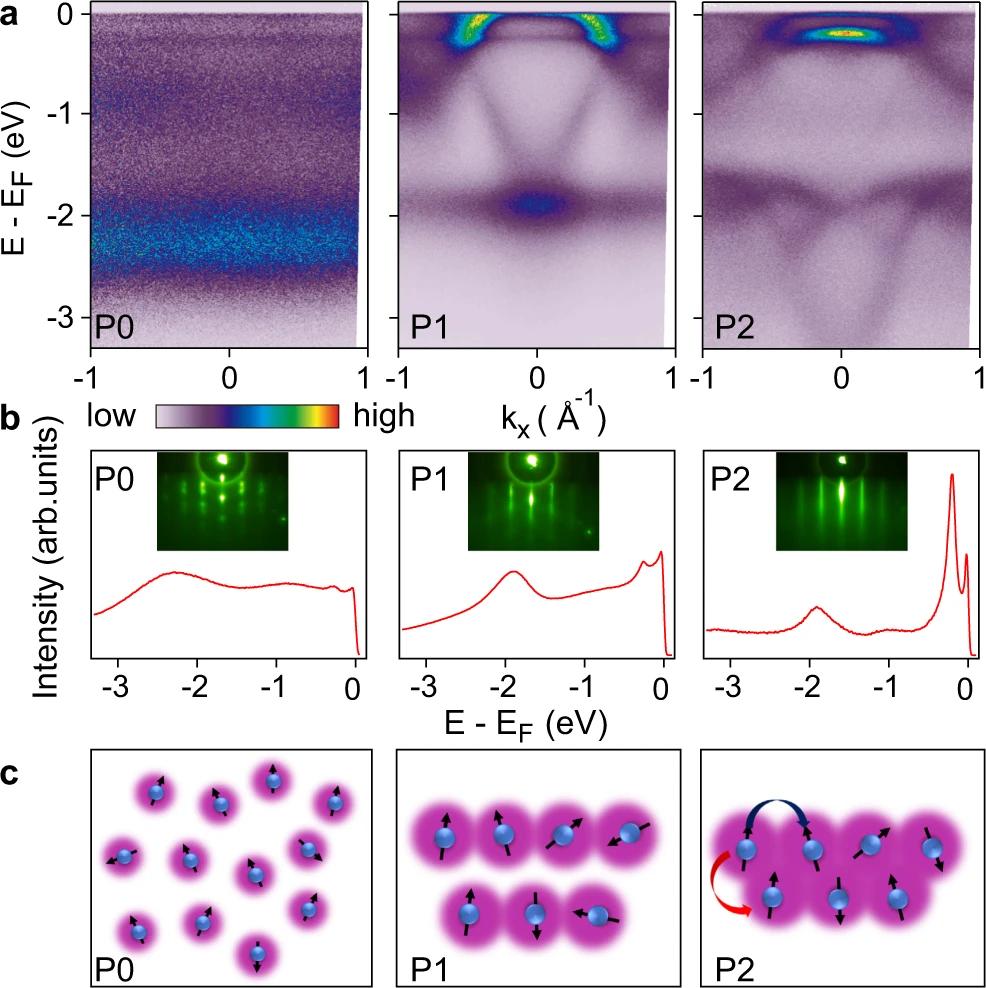 Figure Description: Electronic structure of a thick Ce film at 20 K after progressive post-growth annealings from ~370 to ~540 K. a Three representative ARPES spectra at different stages of annealings: disordered Ce film (P0), ordered Ce films at intermediate annealing temperature (P1), and at high annealing temperature (P2). b Energy distribution curves (EDCs) at the Γ point for these three phases. The insets are the corresponding RHEED images. c Cartoons illustrating the proposed origin of the different electronic structures. The reduction of the interlayer spacing in P2 is exaggerated.

Ce films were grown on top of epitaxial graphene layers at a temperature of approx. 100 °C and at a rate of 2 Å/min using a high-temperature effusion cell of a Lab10 MBE. The Ce films were sequentially annealed from 370 to 540 K.

Samples were immediately transferred in UHV from the MBE chamber to a connected ARPES Lab equipped with a DA30-L analyser and a VUV5k He lamp. Measurements were conducted at a sample temperature of 20 K and at an operating pressure of 2.3 × 10−10 mbar. The pass energy was set to 10 eV yielding approx. 15 meV energy resolution.